Because the Gift of the Year is Always its Harvest

In the spring of 2017, a season or two before Chris Ernest Nelson published his first collection of poems, I had the honor of writing a brief blurb for the back cover. Here it is:

To read the poetry of Chris Ernest Nelson is to find solace against the pain of human frailties. Nelson’s words return the weary pilgrim’s gaze to the heavens, singing reminders to delight in the dance of being: in all of its absurd failings of promise and pain. His work belongs not on a shelf, but at the bedside, for hope at the start of a day, and comfort in a dark night of the soul. He reminds us back to the best of our nature, edifying the awkward pain of human nature against the promise of divine light.

Since then, my dear friend has published Harvest to the acclaim of anyone fortunate enough to get a copy of this limited printing, and now, at the end of the following year, he has published his second edition. As I put my feet up for winter break and finally savor the moments I get for reading my copy, I am prompted to get back to my words of praise for a writer whose art (as a visual artist, writer, and teacher) and friendship I deeply cherish.

I’ve been treasuring Nelson particularly this year, because at the end of the past school year he retired from teaching after twenty-five years. If it is indeed true that there are no accidents in this life, then I consider it a great stroke of divine interference that I was fortunate enough to be greeted by his beaming and generous spirit on the first day of my teaching career, fifteen years ago. He was, and continues to be, my first friend on campus, and his absence is deeply felt. He visited last week in his Santa suit to the delight of staff and students, among whom he is a minor celebrity every holiday season, as he graciously poses for Santa photos (for clarification on how apropos this particular character is for this particular author, see the photo below, of Nelson reading at Verbatim Books).  Even better, he came into my fourth period class and treated us to a reading. To be read poetry by a Santa you call friend, in whose original work you find comfort and edification of spirit, and to be hearing this work in the company of students you teach, is one of those rare delights that makes it easy to understand the magic of the twinkle in Santa's eye. 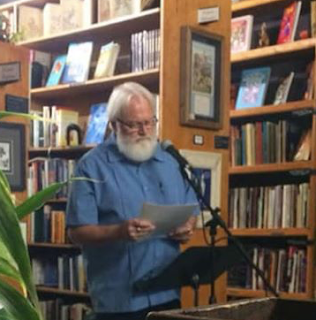 To appreciate the work of any artist fully, it is helpful to consider the context. So let's go back a year and consider the year preceding the publication of the first edition. It began with an inauguration that seemed almost allegorical in its service as an emblem of a dark national era at hand. Orwell's 1984 was on the bestseller list, for reasons that hardly need explanation here, and a bit further behind (but still on the top 100 books of the year) was Bradbury’s dystopian Fahrenheit 451. Goodbye DACA, hello hurricane Maria, goodbye power in Puerto Rico, and thousands dead in its wake. Meanwhile, cold war rhetoric pervades negotiations with North Korea, and the threat of nuclear attack looms large. A solar eclipse crossed the continental U.S. for the first time in almost a century. The shooting in Las Vegas became another in a string of mass killings and we realized we could no longer keep track of the numbers; rollback of net neutrality, the Russia investigation, families separated at the border, children in cages on U.S. soil, the death of Stephen Hawking, the thousands traveling North on foot, seeking asylum from war-ravaged homes.

Nelson meets us here, in a voice outside of time, to remind us that the specific horrors of the specific age are yet not enough to void an older birthright — participation in the ebb and flow of a soul walking through perennial seasons.

Where does one begin? In winter, perhaps.

Or in the morning, where the antidote to a sleepy fog may be a reminder that “morning light comes softly drifting/ into your quiet room . . . [and] greets you with questions about your dreams.”

Yes, I think. Question me more on my dreams. I am tired of speaking of anything else.

This is the edification offered by the artist who knows that “Art should speak/ an excruciating truth/ that is both personal/ and universal.”

You can read Harvest, if you like, as a public service announcement. In seasons of stormy weather, the poet offers a reminder to “Find shelter” and:

flip on the bedside lamp when/ shadow demons pass your window in the dark;/ move to higher ground” . . . [because] “it’s the small things we can manage.

When I found myself in the midst of a season of being ravaged by the inclement weather that came with the closing of the most significant chapter of my adult life to date, he offered me this poem on my birthday, on my facebook wall:  “Pick up a shovel, pick up a seed,/ turn up the earth./ It’s time to plant a dream.”

In a time of lightness, he cautions against self-satisfied confidence, reminding:

Tomorrow when the great storm comes/ with its arched back and bared teeth/ to stand you up against a wall/ and teach you the virtue of fear.

Apt caution in times of exuberance, when the ego is ripe with satisfaction, ready to be plucked and tossed; and much-needed comfort in times of trouble. In times of terror, by this logic, it is possible to recognize moments of enlightenment - and here, in these moments, is company.

A lover’s heart is in his tongue,
he is called to tame the wild thing
and as its master, he must guide it
into deep and dangerous dominions.

Nelson reminds us that the words of the lover are “Treasures born of yearning.”

This is a book to read by opening to a page at random and listening to what is offered. The poet’s voice in this case is almost inseparable from the teacher’s, because the kind of teacher Nelson was when he was speaking to his students is one who understood the value of the questions that no one was asking, and of the objectives that went unnamed. He spoke of “Spirit Talk” and "the children" (as he grew fond of calling them) gathered around his desk to listen as he told stories and spoke of a magic just beyond the veil of the seemingly known world. Chris Ernest Nelson's great gift has always been to offer regular reminders of the ever-present mystery beyond what is immediately perceived in any given moment.

"Speak to us of wonder," says no one too loudly, in the hallways or the dutiful chambers of most classrooms, and yet, among us, he spoke often, asking:

Do you know how it feels to  breathe high mountain air; you know, your head like a  boiled egg about to split open  and spill its robust essence into the open?

To those of us burning with undeclared passion and inchoate confusion, he reminds:

Have you ever held in your bare hand  a fresh coffee in a paper cup, caution extremely hot, without the cardboard sleeve, just to feel its heat?

Anyone living has done so, and yet to live where we do, when we do, is to be subject to an environment that invites us, cajoles us, reminds us, provokes us, to constantly pretend otherwise. The ubiquitous “it’s all good” infects language to a degree on par with “whatever” and “meh” and it is possible to be surrounded constantly by a muffled cacophony of inarticulate cucumbers able to comment inarticulately on nothing but their self-possessed cool. It seems to me that other visionaries over the ages have reminded something similar: to be hot, be cold, but never be cool. Profess all you want, but never profess to know.  I’d prefer to contemplate, and here again I find a friend, noticing with me:

the dust of mortal stars and the eternal spirit swept into the crux of irresistible gravity..

It’s as if he writes constantly to the questions he anticipates would be asked of a teacher by a student, if only they could find the right approach. It’s hard not to imagine echos of Gibran’s prophet in some of the lines, and to imagine an implied “Teacher, speak to us of right and wrong,” preceding Nelson’s eloquent response:

to choose righteousness without inspiration or revelation
To do the honest thing
without
a law or a moral code;
To give oneself away
without
a thought of its return. . .

It’s the time of year where many around the world celebrate the arrival of the divine presence in human form, born in the lowliest of places. As I type this, I have recently returned from Christmas Eve mass, with it's reminder that now is the time of year to “make room.” I can’t help but think of an afternoon over the summer when Chris and I shared a meal on an outdoor patio in South Park, and the conversation took its usual turn towards one version of what he would call “Spirit Talk” and as we spoke wordlessly and in between words about things unseen, he got wet in the eyes and he told me, “If only people could see. I mean, really see. The message is this: The kingdom of God is at hand. It’s right here, right now.”

Fifteen years ago, Chris Ernest Nelson found me in person, in the mail room, when I was in an unfamiliar place where I was scared and knew no one and was desperately in need of a friendly face.

At the time, I did not even know he was a writer. How wonderful to celebrate this writer now, at the second published Harvest, and to know that his words are available to countless readers locally and around the world, to greet people in dark places with the warmth of an old friend. It’s a few days after the winter solstice, the day when the sun in our hemisphere is the furthest it will be, a time which marked for many cultures historically, the beginning of the famine months. It’s a season of dark days and a time to reflect in preparation for new season of growth. In the shadows, in the words of the poet who penned Harvest, a friend is waiting. One must only make room.

Art is, after all “a refuge where all are/ welcome; where everyone, by his own light/ may come in and find a home.”

You can find the poetry of Chris Ernest Nelson at cnhrisernestnelson.wordpress.com.  To get your copy of Harvest, you can email the author at chrisernestnelson@gmail.com.
Posted by Stacey C. Johnson at 5:34 PM